If this is TL;DR for you, do these 6 things:

Turnarounds are damn hard. Some of you may be in the middle of one now. Figuring out “what” needs to be done is probably not so difficult. If you step back the answers are pretty clear unless you lack a strategic direction. Figuring out “how” is hard because it invariably leads to decisions about people. Brian Chesky, CEO of Airbnb, wrote a heartfelt note to his employees about this. Fortunately Airbnb has an excellent cash position so he was able to offer extraordinary severance benefits. We weren’t nearly as lucky.

A turnaround is not just about laying off some people and moving on. It a whole series of things you do to reset the company in a new direction with a new (lower) level of resources. Here I’ll talk about the lay-off component. In a future post I’ll talk about resetting the direction.

COMPLETERS: I leaned heavily on my CFO and my head of HR to turnaround Organic. Both were awesome and I’d work with them again in a heartbeat. Both were consummate professionals. Having a CFO that was very focused on the bottom line, and a head of HR who was very focused on managing change (reductions) in the right way allowed me to focus on strategic direction, decisions and communication. Good balance of thinking. Of course our office and team leads were superb and an integral part of the turnaround but I’m talking about my day-to-day “completers” here.

STRATEGIC DIRECTION: Decision making usually followed an agenda like this:

Digging into the assumptions was hugely helpful in figuring out where to downsize (which is a nice way of saying deciding who had to go). During our darkest days, we had to downsize nearly 1,000 positions and close offices around the world over a 12-18 month period. That was an excruciating time. We were at a size where I had direct reports — office and team leaders — that had to put the individual names on the reduction list. Agonizing decisions. We had the same dialog about strategic focus, alignment with priorities, about things we could continue to do, and things we could not, about costs, risks, ROI. Even when we were clear about a tighter focus with fewer strategic initiatives, we still had people we couldn’t afford. The decisions were not neat and tidy. They were the hard, messy decisions.

DEBATE BUT DECIDE: Most managers really struggled with decisions about whom to keep and whom to let go. They pushed back hard for their team, for their stars; people they were close to. I would too in their shoes. We argued. Fought. To a point this was healthy and resulted in better, clearer decisions. Some managers were able to get there. At some point, if we couldn’t reach agreement, I had to say “enough!” I often used a lifeboat metaphor. We could only go forward with a small number of people or we would all go under. Period. Each team leader had to make the decisions about who would stay and who would go. Period. It was viciously, brutally, crushingly difficult. These decisions would put people out of work in a period where jobs were very, very difficult to come by. These decisions would break up well-functioning teams. These decisions would destroy morale. But our survival was at stake and we couldn’t overload the lifeboats or we’d all sink. Some managers ultimately made the hard decisions. Some flat-out refused. Last minute heroics — ‘I’ll die for my team, but I won’t let anyone go’ — were not helpful. As the CEO, I had to force those decisions. And more often than not, that manager would be asked to leave.

Generosity is key here. Offer as much severance as you can and — with employees’ permission — circulate their resumes with recommendations to your network.

ACT FAST: Once we had the list, we had to do the terminations as quickly as possible. Why? Everyone knew it was coming and fear paralyzed the company. Communicating terminations was tough. We tried pretty much every method and none was good — in groups, 1:1. All sucked. No type of coating made the pill easier to swallow. In today’s world, there are security concerns about disgruntled employees. Err on the side of caution. At Organic, there were times when we had security on site and visible during terminations. It is an additionally awful feeling for everyone. The best advice is to be prepared and make it a simple, short, dignified conversation. Don’t wax poetic about earlier days. Don’t burden the person with your emotions. For many people, learning they are let go shocks them to the core and its hard for them to process anything on the spot. Give them space and time. Let them absorb the news. Give them the option of coming back to you with questions.

COMMUNICATE QUICKLY AS ONE: Once the go-forward team was in place, it was very important to realign around the strategy and direction — discussing roles, responsibilities, timeframes, risks, etc. — while acknowledging what happened. “Survivor guilt” was powerful. We recognize it. Discussed it. During this time, it was very important for senior managers to “speak as one.” By this, I mean that all senior managers needed to “own” the decisions we’d made. Otherwise, a we/they situation emerged which was counter productive. Believe me, many times, managers laid the tough decisions at my feet. “I didn’t want to let so-and-so go, Mark made me do it.” Demonizing the CEO or other senior managers was not helpful as we moved forward. It created more anger and mistrust. It was much better to come back to the goal of surviving and succeeding, back to the strategy. So when you make the decision to cut your team, the leadership team needs to own that decision together. As one. And communicate as one.

Do these 6 things. Questions welcome. AMA. 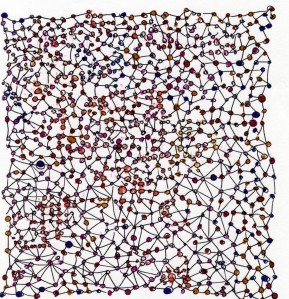 I sat down three times to write this post and aborted mission every time. I hoped more research, conversation and consideration would get me off the fence. I just can’t get there.  I’d sure like more dialog though so please read my post and share your insights.

I’m very drawn to the virtual currency space.  I can envision a sprawling, open ecosystem.  The Bitcoin ecosystem is exploding.  VC money is pouring in.  The media is going crazy.  I see sparks of genius (peer-to-peer, distributed, decentralized, open-source, low/no fees) in the design.  Bitcoin has solved some really interesting problems (that distributed general ledger is brilliant).  I can feel it’s potential in my gut.  But I think there are some intrinsic flaws in Bitcoin’s design as a virtual currency and it’s keeping me from jumping into the ecoysystem with both feet.

I spent two wondrous years (2008-2010) as the steward of a significant global “virtual economy” when I was the CEO of Second Life.  At the time, Second Lifers were doing over US $500 million (yes, five hundred million US dollars) in user-to-user transactions via the Linden Dollar (Second Life’s micropayment mechanism).  That’s a big number – especially considering the average transaction is a buck or two.  I can’t claim any credit for creating the staggeringly robust virtual economy called Second Life – that goes to Philip Rosedale and other brilliant Lindens before me.  But I was an eager student and I learned a lot about micropayments and virtual currencies from the creators and participants in the economy.

The Linden Dollar works brilliantly because:

Let’s look at Bitcoin through the same lens:

So where does this all get me?  Well, there are plenty of investment opportunities and I see fellow investors jumping in.  I think I’ll stay on the sidelines for now.  When you invest in a startup you don’t assume the founders have it right but you assume they’ll get it right.  My biggest problem with Bitcoin is that it has some systemic flaws and I’m not sure – given the way it’s constructed – that they can be addressed, or who will address them…so I’m reluctant to invest in the ecosytem.